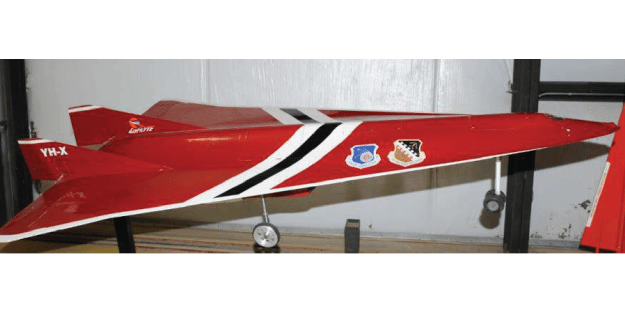 The radio-controlled craft was developed by Accurate Automation Corporation, of Chattanooga, TN, under the sponsorship of NASA Langley Research Center in Hampton, VA. It was first flown at Edwards AFB in December 1996 by a test team that included personnel from the 445th Flight Test Squadron and NASA Dryden. This 100-inch Low-Observable Flight Test Experiment (LoFLYTE) went on display at the AFFT museum in 2001.

NASA and the Air Force Research Laboratory used the LoFLYTE remotely piloted research vehicle to demonstrate low-speed handling characteristics of an airframe shape known as a “waverider.” A waverider is a craft that “surfs” on the shockwave created as it flies at hypersonic speeds – above Mach 5, or five times the speed of sound.