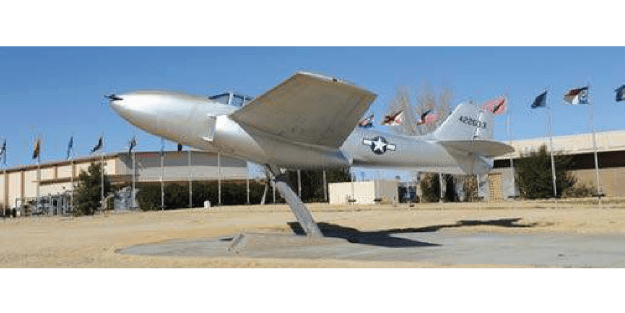 The Bell P-59 Airacomet was the first American jet fighter aircraft, designed and built by Bell Aircraft during World War II. The USAF was not impressed by its performance and cancelled the contract when fewer than half of the aircraft ordered had been produced. Although no P-59s went into combat, it paved the way for another design generation of U.S. turbojet-powered aircraft.

The museum’s aircraft, known as the “Reluctant Robot,” was placed into active service with the 445th Fighter Squadron in 1945 and operated with the Squadron out of both Muroc and March Field, CA, before deactivation in January 1946. Withdrawn from USAF service by 1950, the Reluctant Robot was subsequently placed on display in front of the Edwards AFB library and is one of only six remaining P-59 aircraft.