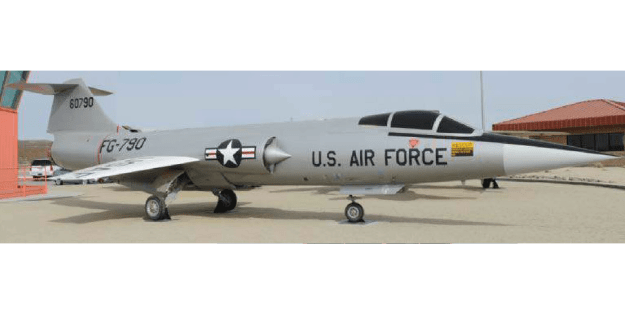 This Lockheed Starfighter had a very interesting flight test career. It was loaned to NASA’s Dryden Flight Research Center shortly after being delivered to the USAF in 1957. In 1959, it was returned to Lockheed to be fitted with a G-model tail for nuclear weapons shape trials.

This aircraft was also used as a chase plane for the first flight of the Lockheed SR-71A in 1964, and later flew with a U-2 nose installed to support AIM-7 missile testing of the F-104S models. It returned to NASA service in 1966 and flew test missions at Dryden until 1977. After being retired, it was transferred to the AFFT museum in 1985. The Starfighter was restored by the 412th Test Wing Surfaces team in 2006.