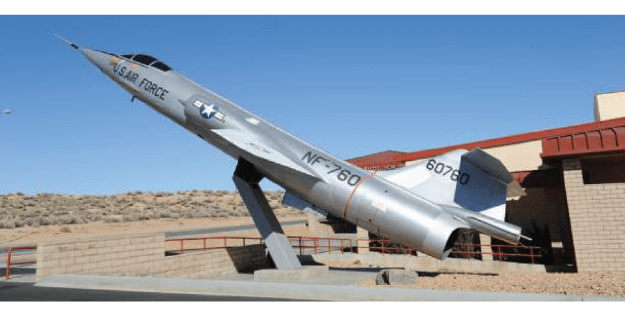 The Lockheed NF-104A was a mixed power, high performance, supersonic aerospace trainer that served as a low cost astronaut training vehicle for the X-15 and projected X-20 Dyna-Soar programs. Three aircraft were modified from existing Lockheed F-104A airframes and served with the Aerospace Research Pilots School between 1963 and 1971. The modifications included a small supplementary rocket engine and a reaction control system for flight in the upper atmosphere. During the test program, the maximum altitude reached by these aircraft was more than 120,000 feet.

The museum’s aircraft is the second NF-104A built. After retirement, this aircraft was mounted on a pole outside the U.S. Air Force Test Pilot School.