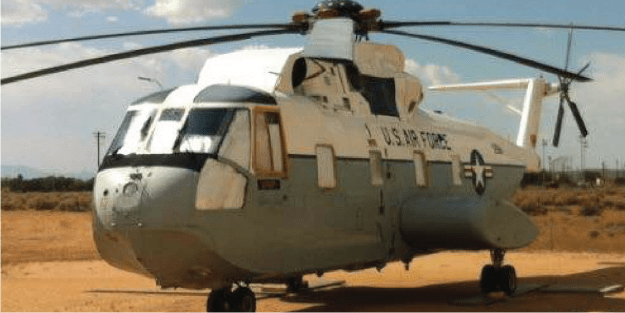 The Sikorsky S-61R was a company-funded development of their S-61/SH-3 Sea King model. It features a redesigned fuselage with a rear-loading ramp, a conventional watertight hull instead of the S-61s boat-hull, and retractable tricycle landing gear. While still under development, the USAF placed an order for the aircraft in lieu of Boeing-Vertol CH-46Bs because Sikorsky could guarantee earlier delivery. The S-61R was designated the CH-3C while in USAF service. The CH-3Cs were kept busy with servicing Atlas and Minuteman silo complexes, as well as the short-lived Texas Tower support.

This particular helicopter had its first flight on 22 November 1963 and was acquired by the AFFT museum in 1987 after nearly 25 years in service.