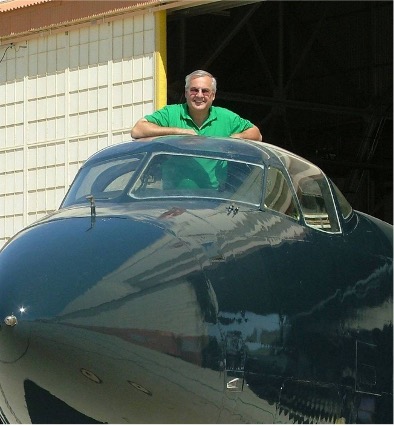 George Welsh is the Director for the Air Force Flight Test Museum located on Edwards AFB, California and a Life Patron of the Flight Test Historical Foundation. A native of San Diego, California, George came to the Flight Test Museum in 2011 from the Flying Leatherneck Aviation Museum, located on MCAS Miramar, where he had worked as an aviation archivist and historian since 2009. Prior to his ‘hitch’ with the Marines, George, and his wife Michelle, had published an aviation history magazine titled “Bomber Legends”, dedicated to the memories of all bomber aircraft veterans from World War II, but in particular the B-24 Liberator. George is an Air Force veteran and served in both US Air Forces Europe and Strategic Air Command. In 1981, he began volunteering at the San Diego Air & Space Museum while attending college on the G.I. Bill. He was soon asked to join the staff and remained there for the next fifteen years working in several areas of the museum including archival, curatorial, education and aircraft restoration. George was also an Aerospace Instructor with the San Diego Community College District. George and Michelle have one son and reside in Tehachapi, California.

Renee Marchiano, a Museum Specialist at the Air Force Flight Test Museum, is responsible for the processing of incoming donations, coordinating with volunteers on various museum projects, and provides additional museum support through various outreach events, including historical/educational tours. Prior to her civilian Air Force service, Renee spent nearly 7 years as a contractor at NASA Armstrong Flight Research Center, where she served in a wide-range of duties across a range of support offices. Her love and her passion were discovered when she joined the NASA Armstrong Research Library and played a large role in a historical digitization project. Renee has an Associate of Arts degree in Marketing/Management and a Bachelor of Arts degree in Organizational Management.

Originally from Riverside, California, Sergio Cuevas served six years in the US Air Force as an F-16 maintenance professional. He was based during his time at both Edwards AFB and Kunsan, South Korea. Sergio is the museums newest employee and has been with us since last October. His duties as an ‘outside’ Curator include overseeing the maintenance of all of the museum’s aircraft and artifacts. Sergio currently resides in Rosamond, California.

Stephen Robinson spent 18 years in the US Navy and retired as a Public Affairs Specialist. He arrived at Edwards in 2010 and was assigned to the Public Affairs Office spending four years there. In 2014 he was moved to the Flight Test Museum where he assumed the duties of museum administration specialist. Stephen currently resides in Lancaster, California, with his wife and daughter.